I’ve been an eBayer for a long time, but only recently discovered the fun of local online auctions. Due especially to the Coronavirus crisis, many local auction houses are turning to the Internet to sell things. Since the winnings must still be picked up locally, it lessens to competition and really makes things more interesting.

It all started for me with a local auction for the estate of a man named Drew Morris; he is something of a local legend, having run a company called G.W. Lisk for many years. I knew of him in conjunction with my work at Clifton Springs Hospital.

I saw from the estate auction items that there were quite a few things I liked! There was a bronze bust of Theodore Roosevelt, several pictures of George Washington, and I watched all of these items. On a sheer happenstance, I was playing the piano at my sister-in-laws (her piano was a no-good – many keys stuck together would create a terrible cacophony when trying to play), and she asked me if it was time for it to go to the curb. I said I felt it was, but then I was inspired to suggest that there was a nice Yamaha spinet at the Drew Morris auction. I bid for her, and won the piano for a very reasonable price! 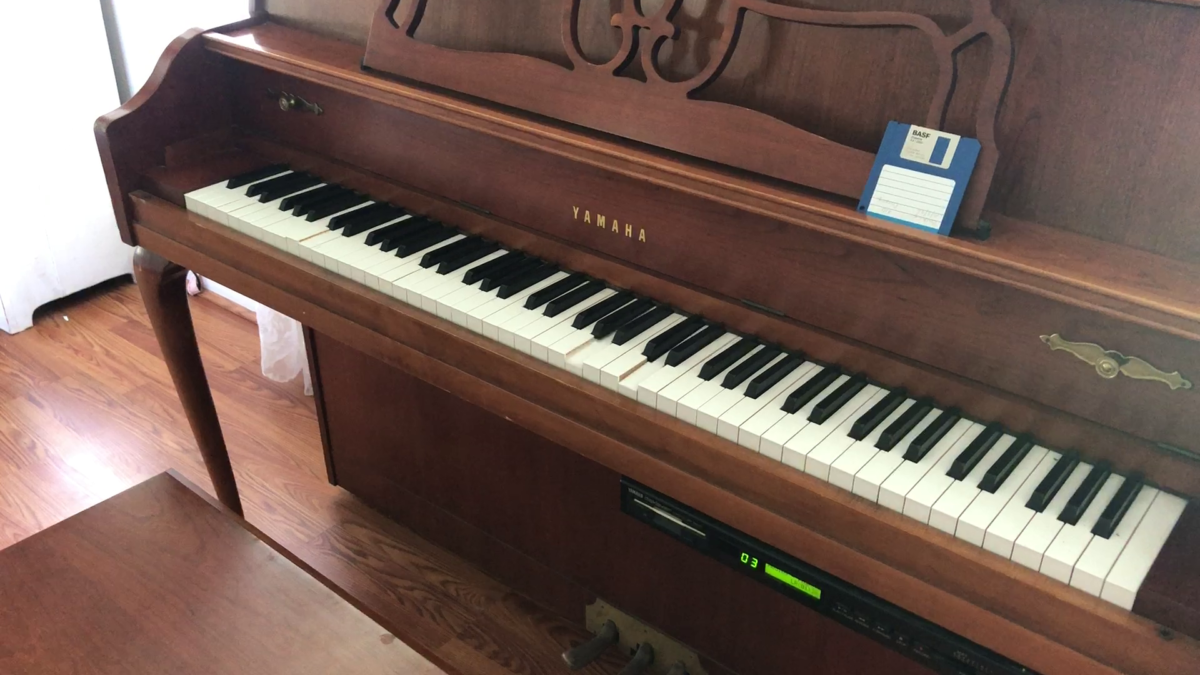 What is even more exciting about this piano, is that it is a Disklavier. Yamaha Disklavier pianos are the modern player piano – using a CD or floppy disk and a small control unit, you can play all kinds of music. One of these in good working order is a treasure. It’s also a very heavy piano! But I know that my sister-in-law and her family are enjoying it, and I’m so blessed that we found it.

Regrettably the other items at the auction went for more than I was willing to pay, but that is how auctions go sometimes!

Perusing other local auctions, I found some antique bucksaws, which I managed to get for $30 – and a “lot” of a table, phonograph, and antique TV for $20. I think I got a good deal.

The bucksaws are pretty standard wood saws, one with coarse teeth and one with finer teeth. With some work they’ll probably be perfect for using.

The phonograph I picked up is a 1952 RCA Victor 2-US-7, which is mahogany mid-century styled unit. 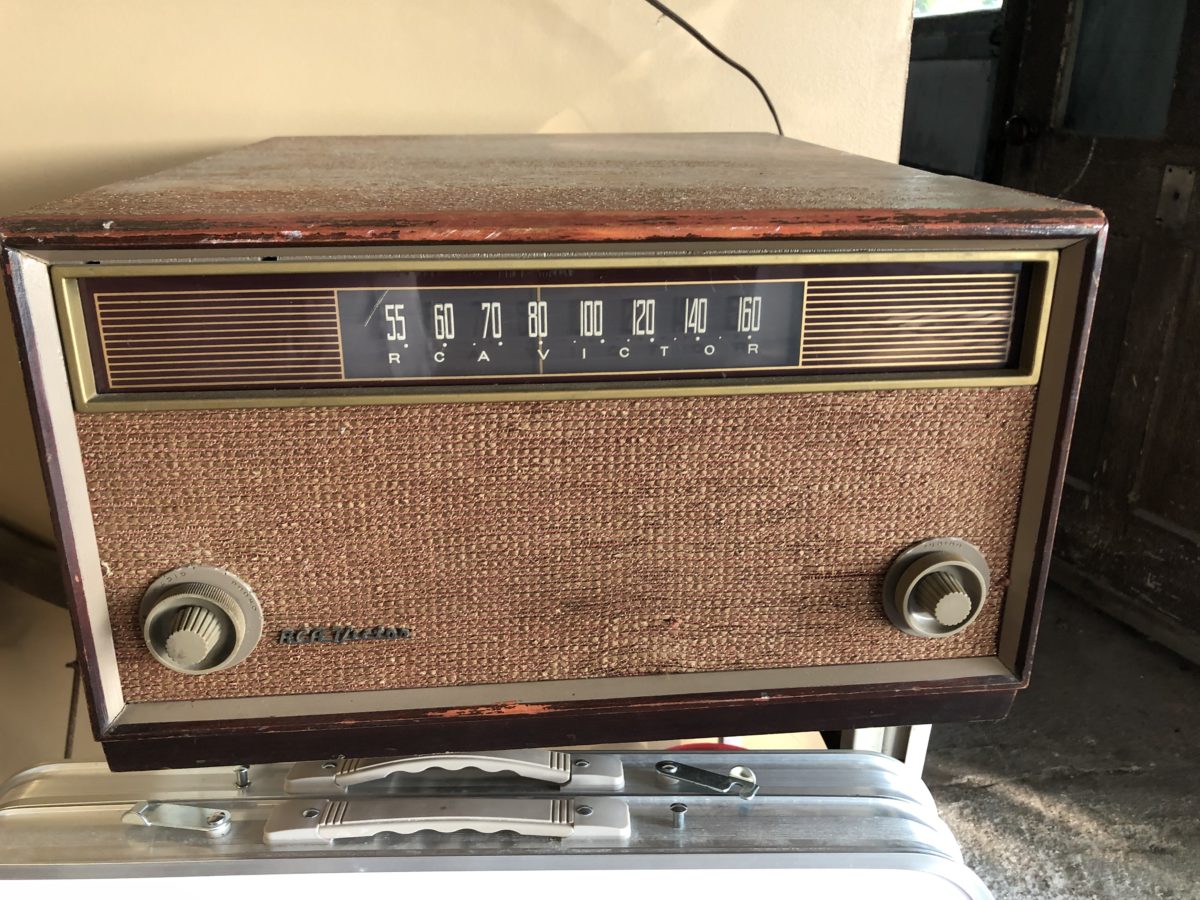 This unit was home at one time to a mouse family, so some cleanout was required. At some point, someone swapped in a Garrard Autoslim P Mk. II turntable instead of the original.

This set will need the usual replacement of wax paper and electrolytic capacitors. Being a later model set, the non-polarized plug could make the chassis hot – so it is unwise to touch the control knobs while standing in bare feet on a concrete floor! I’m now using a rubber mat and putting the knobs back on when testing.

The dial string is broken, that will need replacing. The Garrard turntable is in generally good shape; the stylus was broken, so I ordered a new one of those. This turntable is a 4 speed automatic changer. Lots of metal linkages and gadgetry with old glue…er, grease to clean up and re-lubricate. 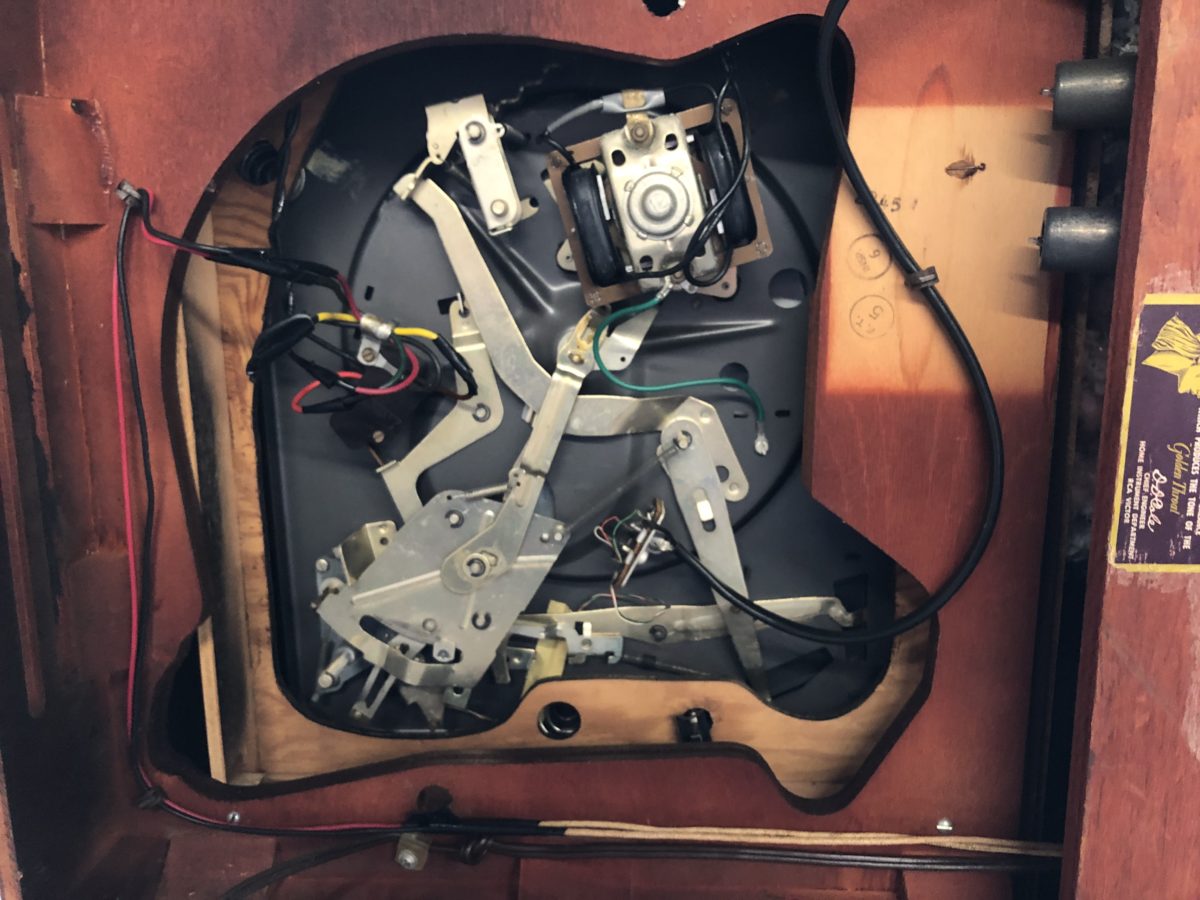 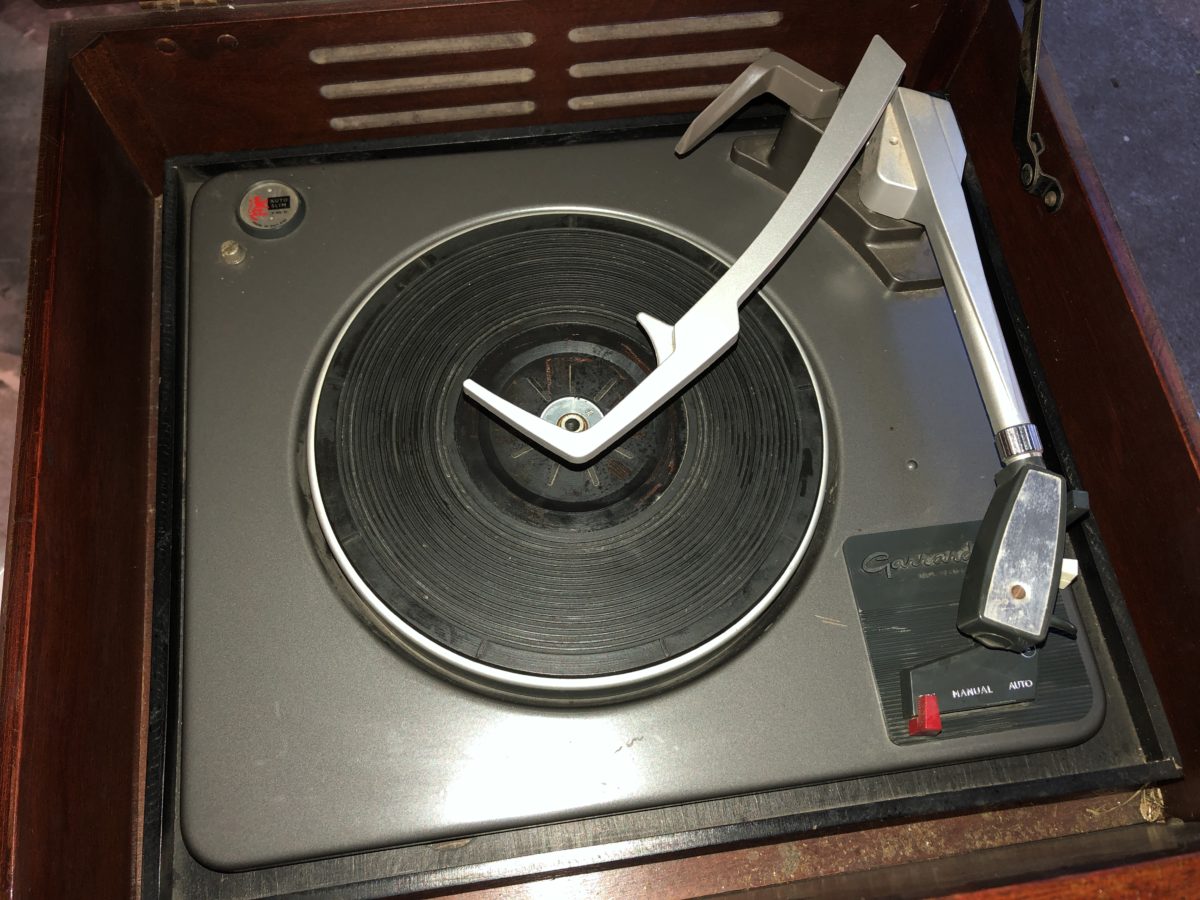 The turntable uses a rubber idler wheel that moves around on the motor spindle to get the various speeds. This is, to me, a haphazard way of doing it – but it seems to work. The whole thing is very sensitive to any drag due to old sticky grease. Right now, I have the platter spinning at all four speeds, but engaging the auto-mechanism kills it due to the linkages needing cleaning. So, more to come on this! Should be functional in manual mode for now though.

The cabinet needs refinishing due to a lot of finish damage; so I am rubbing it down with Formby’s refinisher and steel wool. It will get a good laquer treatment when I have it all cleaned up.

The other treasure is a 1948 General Electric Model 810 TV. This is a 10 inch TV, made only a couple of years after the first retail TV (as we know them) appeared on the market.

The TV cabinet looks to be in overall excellent condition. I took some time today to remove the chassis to look it over. This is my first vintage TV, and I’m hopeful to make a good job of restoring it. This unit has all the original knobs, and looks to be very original inside. 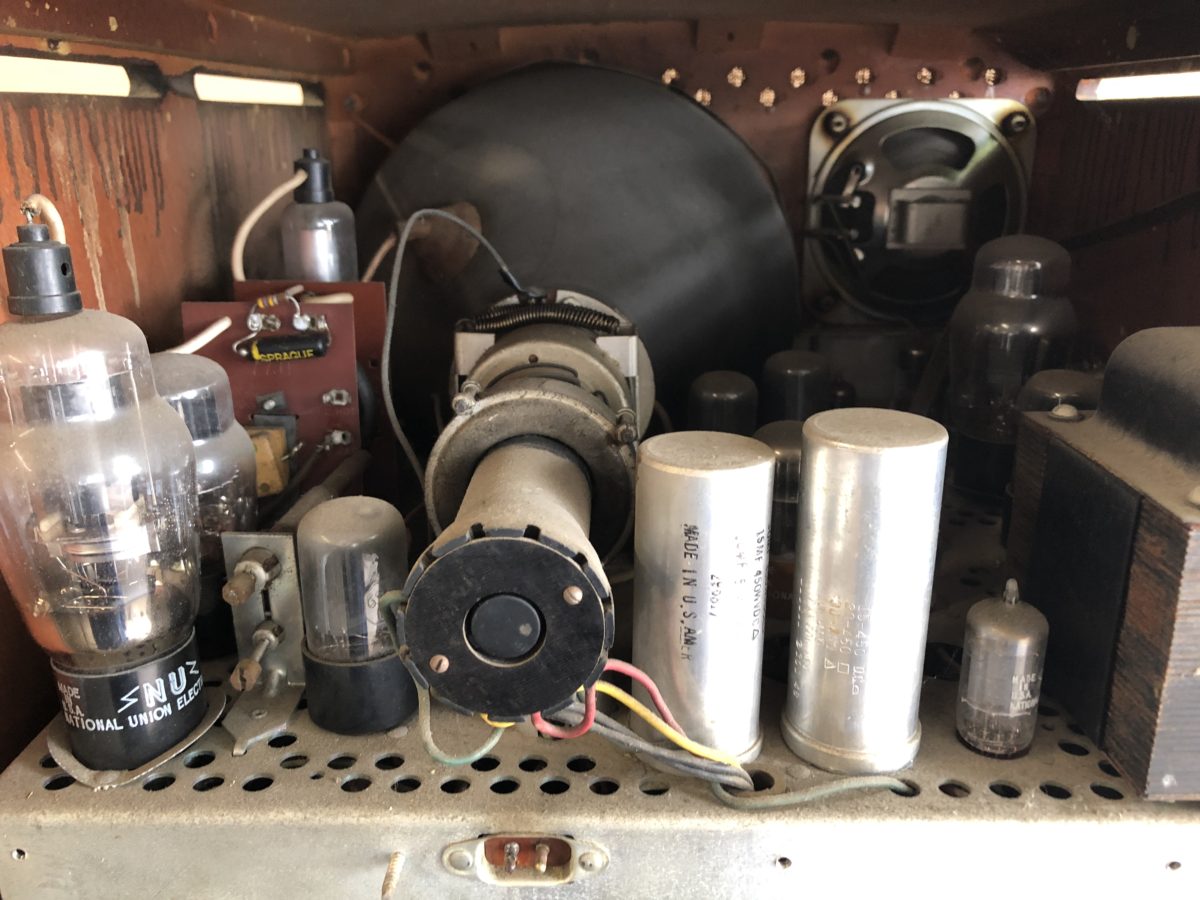 I took some time to clean all the tubes, applying some superglue to any loose bases. This set will need a full replacement of all the wax paper, mica, and electrolytic capacitors. Sadly, I don’t have a CRT tester – so without completely restoring the circuits, I won’t know if the TV will actually play. Since analog broadcasting has ceased, I’ll need to use a VCR or something with an RF output in order to test the reception. This will be a worthwhile project! 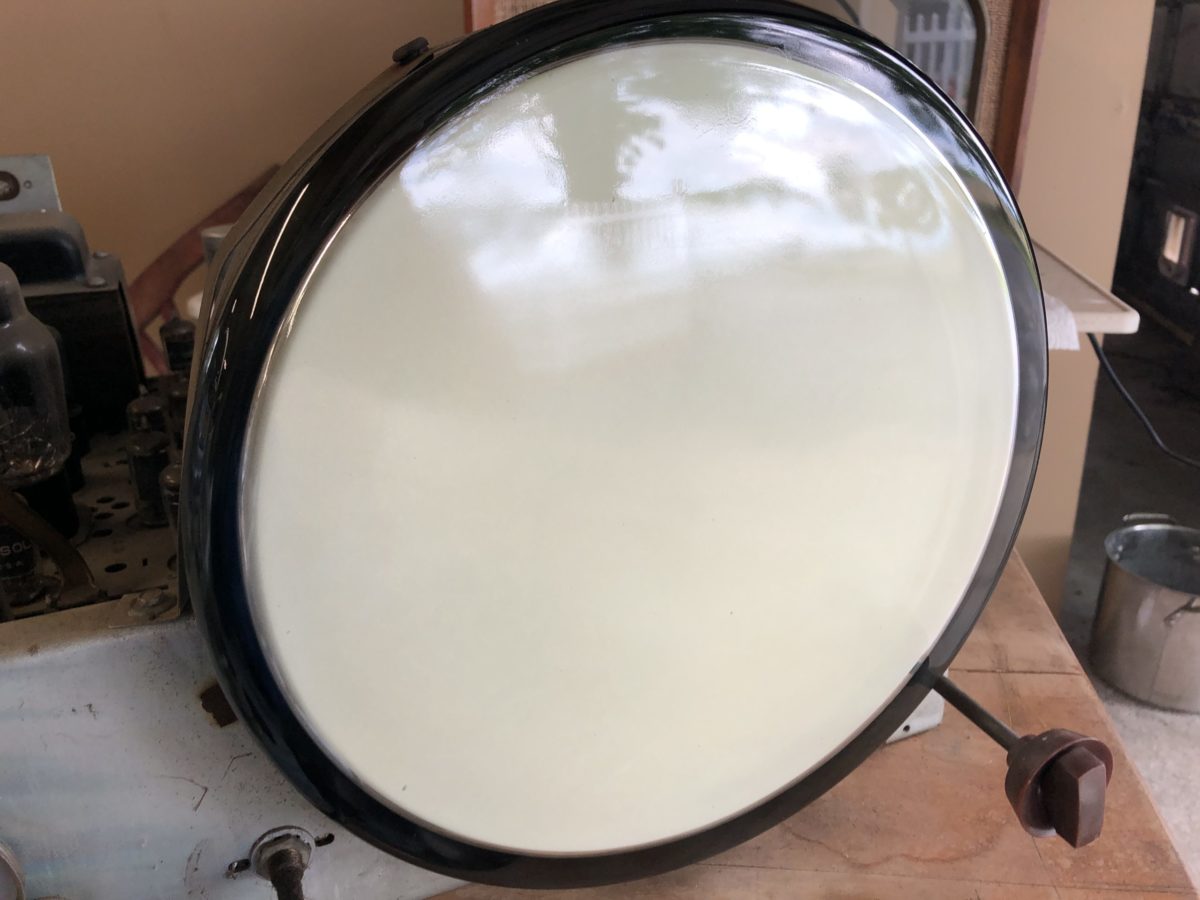 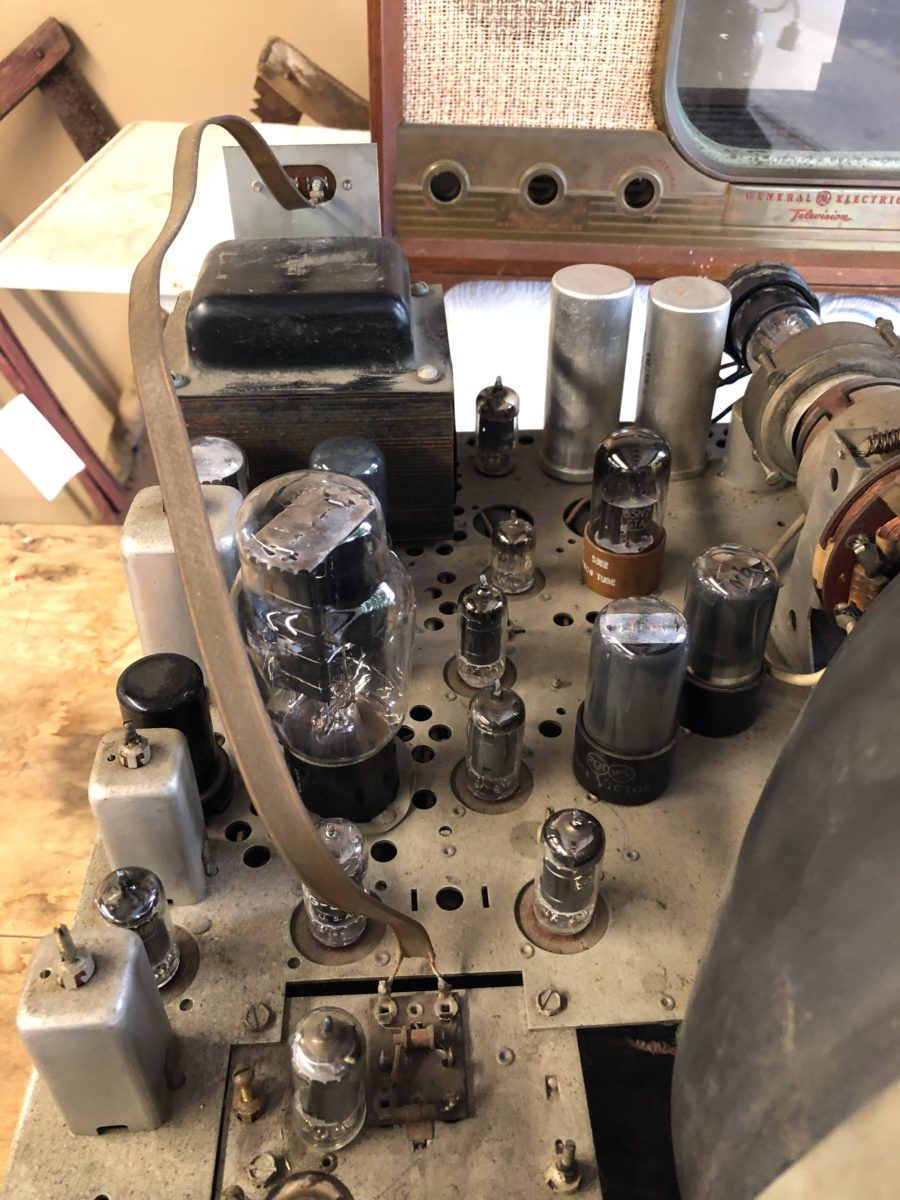 The picture tube is beautiful! The gray coating on the inside just looks so tidy and clean (after a little Windex). The Model 810 uses an aluminized CRT which provides a brighter picture than most other sets of the era. This also makes the CRT harder to find as a replacement part.

So, anyways, more to come on the restoration of these two beauties. I have to form up my shopping list for capacitors, and then once they arrive I’ll be diving into them.

Years, ago, when I was young, I studied for and was awarded an amateur radio (ham) license. Call sign KC2GQP was on the air. As a reward for this achievement, my Dad bought me my first ham radio - an Icom handi-talkie. I was so proud to have my radio,

The completed planterSeveral years ago, Sarah picked up a small wagon planter at a local greenhouse. The rough-cut wood weathered beautifully, and it was host to many flowering plants over the years. The old wagon finally rotted out, sadly, so I thought it might be fun to work up a
I was really excited to receive back the digital scans from the first roll of film shot through the FED-2 camera. I use North Coast Photo [https://northcoastphoto.com/] for film developing and scanning. Since this was an unknown camera to me, I chose to use their budget scanning option.